Destroying A King's School in Jordan (Built in 1947)

These are the pictures that tell the story of tearing apart a landmark in this country's heritage. 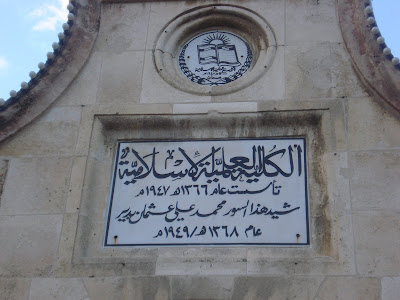 If you want to torture a man who has great passion for the history of Amman, all you have to do is take him to stroll down Jabal Amman and walk around the School that was built in 1947, the "Islamic Scientific College" It's wall once stood tall all around the buildings that constituted the architectural stamp of a different era.
Jordan is still young, a country that is less than a hundred years, so when you talk about buildings that are 60 Years old. The first international football field, is no longer there, instead you will find the new buildings in this picture. Some of the most influential people in this country studied behind those thick walls. Including King Hussein, Ministers, Princes, Politicians, Opposition figures and many more. 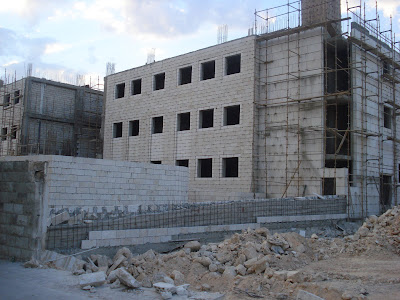 The school's management seems to have a different architectural opinion!! So they started renovating, demolishing, removing structures that would have otherwise been kept as a landmark in this city's history. 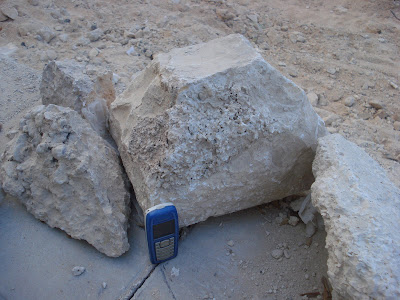 A stone like this one, would have been kept safe to use for renovation, you can never find any piece of stone with this thickness, compare it to the mobile (scale). I would probably sell the wall stones for a fortune because of it's age for someone who knows it's worth. Hmmm, maybe a few Israeli's who would like to fake the age of a building! 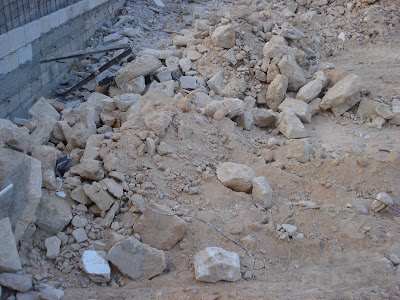 I had the opportunity to visit Cambridge and have a look at the building's from late 1800 and how they were kept intact... They even charge you to let you in at some colleges to have a look, Imagine if they had the mentality of the managers who run this school today! 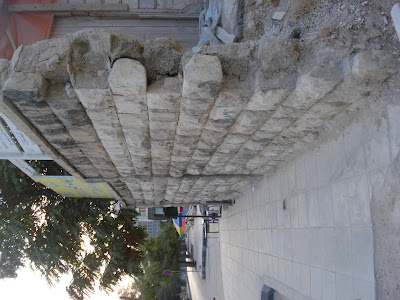 Are you serious? they took down the old wall?

The football field no longer exists... they are constructing new buildings there!?

They took down another portion of the wall near the administation building for no reason!!

Dear writer thanks for this kind feeling but jordan is not a young country of 100 yrs old, i'm sorry to tell you that you have to read history and some archaeology so you can judge on how old a country is.
i just want to give you some facts:
1. a skeleton found in jordan dated to 1.250.000 years.
2. first statue made from plaster when the world first started using plaster was made in jordan 12000 years ago
3. first water system ever know in the world is in jordan it is JAWA dam.
and more and more that you can find about jordan just by searching the web so do it now and check out what i told you.... :)

Anon,
Jordan was inhibited a long time ago... ofcourse, I have written a post about رجم الملفوف which is around 1000 B.C.

But there was no country called Jordan then, so Jordan as a country is very new... its actually less than one hundred years old... The Emirate of Jordan was established in 1921 and independance was declared even later :) Sure there could have been cities and people with ancient cultures, Roman and even before Roman times but this doesn't mean that Jordan today was established a few thousand years ago...

The point was that Buildings in Jordan that are dated in the 40's are old considering the age of the "Kingdom of Jordan"... It was not intended to say that there is no history in Jordan's land... ancient cultures and the current existing political structure of Jordan are two very different things... the first one dates thousands of years ago the later around 50 years only... I hope my point is clear now...

Dear Mr. Kilany,
Thanks for being interesting in my comment, but I still insist on the point that jordan is older than 100 years, many evidences for that; the establishment of the Abbasid caliphates started from Jordan (al humaymeh) and also during that time there was something called JUND AL ORDON, that is the Abbasid leadership in Jordan, besides; the ottoman period is older than 100 years which had ascendance and it was called Jordan.
But we can say that the establishment of modern Jordan after the great arab revolt is about 100 years that’s right, but it was an establishment over a big heritage for Jordan land and people who inhabited Jordan thousands of years ago. So we cant say that there was no Jordan and all of sudden some people came from the middle of nowhere to live in Jordan, so we have to understand the difference between political establishment of a country and the existence of that country.
This is my point and I’m glad to debate this issue with you and I appreciate your care for our heritage, and by the way many of older buildings disappeared and that is a very bad policy for building a modern city which pushes us to take a serious action to save these buildings.

Thank you for your explanation, I think there is a misunderstanding due to our definition of a country...

It was never my intention to state that there was no people in Jordan and that "suddenlty people came to Jordan"... in fact if you read my earlier comment you will see the exact opposite...

However, the existence of people in a piece of land doesn't mean that it is "a country"... It only means that it is inhibited, a country is a much more complex concept, please refer to Wikipedia's defenition of a country and you will see the following lines:
"In political geography and international politics, a country is a political division of a geographical entity, a sovereign territory, most commonly associated with the notions of state or nation and government.

In common usage, the term is used casually in the sense of both "nation" (a cultural entity; see below) and "state" (a political entity; see below). Definitions may vary. It is sometimes used to refer to both states and some other political entities.[1], while in some occasions it refers only to state.[2] It is not uncommon for general information or statistical publications to adopt the wider definition for purposes such as illustration and comparison.[3]"

So... Jordan as it is today always existed as part of a larger political entity and as part of a larger nation, and there is nothing wrong with that... it does not mean that Jordan's people are less important or that we had no culture... I'm sure you know that there was never a separate political or cultural entity that was called the Kingdom of, the state of Jordan or a nation of Jordanians that moved seperately with a self appointed ruler in Jordan before one hundred years...


This is what defines a country, Jordan as a country is new and there is nothing wrong with that. It doesn't mean that no one existed in the land or that we had no culture... It just means that we existed in a different form that is being part of a larger nation and a larger country...