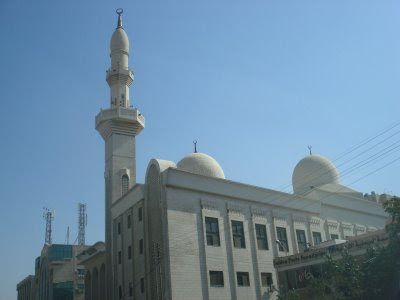 You can tell a lot just by looking at a minaret, at least you used to... when architectures actually knew what it meant. I had the chance to work with a very talented architectural engineer who pointed out a few things about minarets.
Here are some tips, the length of a minaret was based on the status of the one who built the mosque, if it was a man of sizable wealth, a district ruler (Wali), a minister (Wazir) or a caliphate. You can also know in which era the minaret was built and by which nation based on the cross section of the minaret. 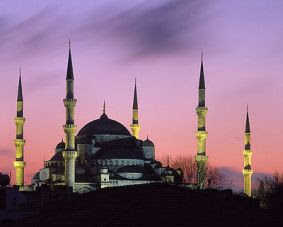 The above picture is for Sultan Ahmed's Mosque in Turkey, If a minaret was built in the Ottoman era you'd call it a "Pen Minaret" مئذنة القلم, the minarets were built to resemble the shape of a pencil, sharply pointed from the top. It meant that science was held at the highest stature.
In the times of the first Islamic state, long before the Ottoman era, Mosques were not only a place for worship but a place for education "علم Elm" or "science"; science in religion and other worldly matters as well.
So I guess the message I was asking about in the previous post is clear, look closer at the Abu Qurah minaret and you will see that every part of the minaret is built in a different Architectural style... You can see the lower part has a cross section of a square, then you have a porch and the shape changes to Octagonal, you have another porch and the topmost part is round.
Each style is actually the way minarets were built in different Islamic Era’s the topmost part is the Ottoman architecture which is the last Islamic ruling. From the first Islamic times in Medina passing by the Omayyad dynasty in Syria, Abbasid era in Iraq and finally Ottoman rule in Turkey.

I read Abu Qura's minaret in one sentence,
“Different times and different places but all melts into one essence. “

Don’t you just love a good sense of architecture :)
Posted by M Kilany at Tuesday, October 09, 2007

Really thank you for the info, very interesting indeed!

Sure Summer... my pleasure, what happened to your blog?! I see your profile but not your blog...

Brilliant!
I am glad i did not study architecture, i would have failed miserably.

Thanks M for telling me about my blog!!! i really do not know what happened or how it disappeared...but here is my blog address for your records:
http://summers57.blogspot.com
:)

Bilal,
Ya sefer, you would have been great as in everything you do...