Optimal Conditions for A Revolution - Robert B Cialdini, PH.D. 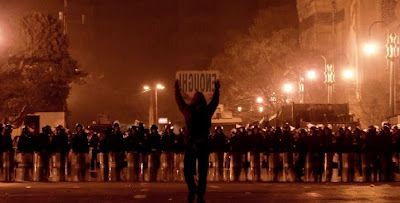 From Influence: The Psychology of Persuasion by Robert B Cialdini, PH.D.
Does Jordan have optimal conditions? Does Egypt's new revolution follow the same path? I'm not sure but I don't know how Egypt was doing in the past few years. However, I find the below much more accurate in the case of Jordan.
Social scientists have determined that scarcity is a primary cause of political turmoil and violence. One of the most prominent speakers of this argument is James C. Davies, who states that:
"We are most likely to find revolutions where a period of improving economic and social conditions is followed by a short, sharp reversal in those conditions. Thus it is not the traditionally most downtrodden people - who have come to see their deprivation as part of the natural order of things - who are especially liable to revolt. Instead, revolutionaries are more likely to be those who have been given at least some taste of a better life. When the economic and social improvements they have experienced and come to expect suddenly become less available, they desire them more than ever and often rise up violently to secure them."
Davies has gathered persuasive evidence for his novel thesis from a range of revolutions, revolts and internal wars, including the French, Russian and Egyptian revolutions - (of course not the one we are witnessing as the book was first published in 1984) - as well as such domestic uprisings as Dorr's Rebillion in nineteenth-century Rhode Island, the American Civil War, and the urban black riots of the 1960's.
In each case, a time of increasing well-being preceded a tight cluster of reversals that burst into violence.
"Freedoms once granted will not be relinquished without a fight".
"We should not be surprised, then, when research shows that parents who enforce discipline inconsistently produce generally rebellious children."
I have read this book in July 2010, and we were witnessing exactly what I was reading all over the world, I said to myself... there are so many other factors to be looked at but its a good point to remember.
Couple this with a very interesting part on authority figures and its influence you get an understanding of how can a policeman stand in the face of his fellow citizens and beat the hell out of them... I will get to this point later on.
Posted by M Kilany at Friday, January 28, 2011